Fast, economical and sustainable: will the next innovation be the return to pneumatic mail?

The technologically advanced and innovative plant located at the Banca Sella headquarters in Biella was historically employed for the delivery of documents and small packages to the most distant stations, at a speed of 7 meters per second, avoiding the continuous journey of employees between officesNow a comeback of this technology is being thought of to move documents and objects at 1,200 kilometres per hour. And maybe people too

Back to the Future. It is recent news that, in the wake of the green economy and the rethinking of workplaces, the nineteenth-century invention of the pneumatic mail system could have an unexpected second life under the banner of innovation. And not only for documents and objects: it is a proposed mode for the transport of passengers as well.

The project is called Hyperloop, the pneumatic mail system of the future. It will be capable of exceeding the speed of 1,200 km per hour and will be safe, less expensive than other transport systems, energy self-sufficient, clean. Science fiction? Maybe not. A Californian company, in fact, one of the best-known crowdfunding and crowdsourcing platforms, has announced its intention to develop the ambitious project. The idea comes from Elon Musk: the creator of Space X and Tesla Motors. In short, the man, that is planning to colonize Mars, takes up the idea of the old pneumatic mail system to imagine a new way of moving and travelling.

After all, good ideas and the right spirit never get old: they change and adapt to new times and new needs. The pneumatic mail tube unofficially born at the beginning of the 19th century, but fully recognized only in 1886 thanks to the patent of the "canisters" and the "sealed" network - was one of the technologically advanced and innovative systems that fascinated the new hires in Banca Sella, starting from the 1970s, in the headquarters located in Via Italia in Biella. A real "web", even before the advent of the electronic mail and the internet. It was a large "ring" tube connected to an electromechanical centre that introduced compressed air into it, allowing the circulation of document holders. A series of "stations" allowed the receiving and sending of the canisters. The use was simple: a few buttons to choose the destination; the canister with its contents placed in a sort of funnel, and sent away, sucked by the system. An electro-mechanical exchange "opened" the ring for an instant, sucked the canister into the circle and took it to the arrival station, where a mechanical system would fish it out, making it fall into a basket.

Its arrival produced a typical thud that colleagues, who worked in the Via Italia headquarters will certainly remember as well as the noise of the going through the pipes, above the false ceiling, which was very similar to that of the trolleys on the tracks of an enchanted castle at the amusement park. 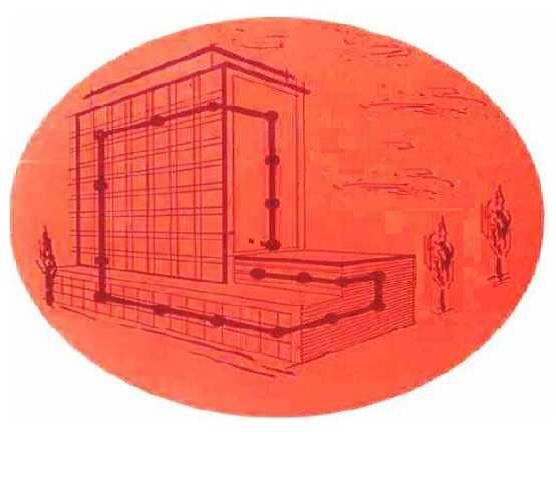 The pneumatic mail tube system at the headquarters in via Italia became operative in May 1972. Eight stations, brought to 21 already in 1979, which were much appreciated and useful. The plant fulfilled its purpose. When new offices were opened in via Volpi, on the other side of the road from the headquarters, a pneumatic mail tube line was even installed that passed under the road surface. Which were the advantages? Free the staff of the time needed to do several times. Which are the advantages? Freeing the staff of the time necessary to collect and deliver the mail several times a day, document transmission (therefore "communication") at any time, reduce the risk of lost packages, speed up procedures involving several offices.

Furthermore, pneumatic mail also allowed the sending of small size objects, and it was fast: the technical notes of the plant declared a speed of 7 m / second for boxes in transit, i.e. 30 seconds for delivery to the most distant station from that of the sender.

The advent and development of computer networks caused a gradual loss of importance of the pneumatic mail which failed to see the new millennium. Large sections of it were removed on the occasion of the subsequent refurbishing works carried out at the headquarters in via Italia while, pipes between the floors, served for the data lines.

However, now there may be a new future.